Both Jerry and Michael trade songs and talk about the stories behind the music. Jerry Gray has a rich history to share with his audience and is an engaging performer.  Michael’s songs are like “stories put to music” and are steeped in the traditions of legendary roots singer/songwriters. It makes for one special set of music. 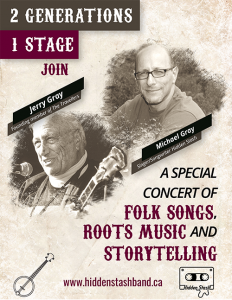 This Land Is Your Land

Jerry Gray is a founding member of the legendary Canadian folk group, The Travellers. The Travellers performed all over the world, representing Canada to international audiences, including command performances for several Prime Ministers and even Queen Elizabeth and Prince Philip. The Travellers also wrote the Canadian lyrics to the Woody Guthrie song “This Land Is Your Land” which became Canada’s second national anthem.  Jerry started The Travellers in the early 1950’s and continues to perform well into his 80’s. In addition, he teaches courses in folk music history at colleges and universities in both Canada and the United States.  Jerry Gray has received numerous distinctions, including being the first Canadian recipient of the AFL/CIO Joe Hill award, and the Lifetime Award by the Ontario Federation of Labour.

This Land Is Your Land

Michael Gray is an emerging songwriter and performs under the name Hidden Stash.  He released his debut album “Mixed Cassette Tape” which offered up rock, blues, soul, C&W and folk with a retro twist. The album showcased Michael’s strong songwriting chops, with musical influences that are not easy to miss: Tom Waits, Van Morrison, The Band, Leonard Cohen, Bonnie Raitt, Dr. John, and more.  “Honest lyrics with a raw edge and a lot of truth in them….awesome sauce.” – Song Door International Songwriting Competition. “Michael Gray’s exceptional and personal songwriting skills are at the forefront and will make you listen just that little closer.” – The Blues and Roots Mag. Michael performs frequently with both his 6-piece electric band and 3-piece acoustic trio.

Got To Be There